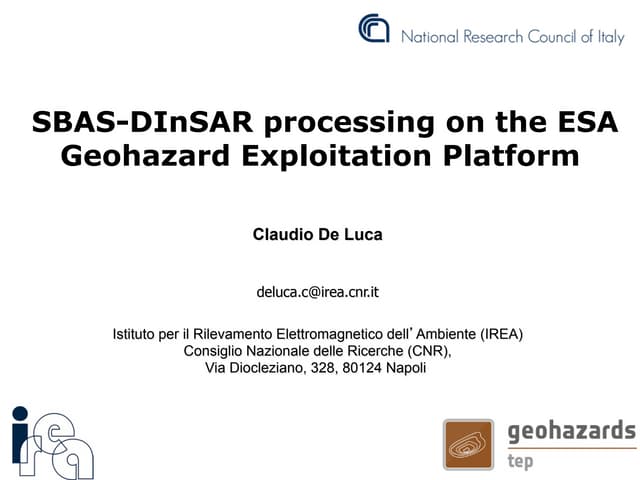 In the context of space-borne geodetic techniques, Differential Synthetic Aperture Radar Interferometry (DInSAR) has demonstrated its high performance in measu…

In the context of space-borne geodetic techniques, Differential Synthetic Aperture Radar Interferometry (DInSAR) has demonstrated its high performance in measuring surface displacements in different conditions and scenarios, both natural and anthropic. In particular, the advanced DInSAR time series processing method referred to as Small BAseline Subset (SBAS), that allows studying both the spatial and temporal variability of the surface displacements, has proven to be particularly suitable in different contexts, as for natural hazards (volcanoes, earthquakes and landslides) and human-induced deformation (subsidence due to aquifer exploitation, mining operations, and building of large infrastructures). Recently, an efficient implementation of this algorithm (referred to as P-SBAS approach) has been fully integrated within the ESA’s Grid Processing on Demand (G-POD) environment, which is part of the Geohazards Thematic Exploitation Platform (GEP) of ESA. The GEP is devoted to the exploitation of EO data resources in the context of the Geohazard Supersites & Natural Laboratories as well as on the CEOS Pilots on Seismic Hazards and Volcanoes. The GEP is sourced with elements, data and processing, including P-SBAS, relevant to the geohazards theme. The integration of the P-SBAS algorithm within GEP resulted in a web-based tool freely available to the scientific community. This tool allows users to process, from their own laptops, the European SAR data archives (ERS, ENVISAT and Sentinel-1) for obtaining surface displacement maps and time series in a completely unsupervised way, without caring about data download and processing facility procurements. The workshop is organized in four parts. First, a short overview on the DInSAR processing methods allowing retrieving mean surface deformation maps and displacement time series will be provided, with a specific focus on the SBAS-DInSAR technique. Secondly, the GEP and G-POD environments will be introduced and the P-SBAS web tool will be presented. The third and the fourth parts are dedicated to the advanced features and to case studies and results achieved via the web tool, respectively.

8 posts were merged into an existing topic: Features basket