On Friday 30 October 2020 at 11:51:25 (GMT) a powerful earthquake stuck off Turkey’s western coast and north of the Samos Island in Greece, causing several collapses and damages to buildings, as well as human injuries, even casualties. According to the Turkish Disaster and Emergency Management Presidency (AFAD), more than 60 people had died and 900+ were injured in the province of Izmir (Turkey). On the Greek side, two teenagers were killed in Samos Island, and more than 250 buildings were heavily damaged according to the Greek Earthquake Planning and Protection Organization (EPPO).

Based on the Hellenic Unified Seismological Network (H.U.S.N.) the M7.0 quake - which was felt as far away as Athens and Istanbul - struck at a depth of ~10-15km. It was the biggest tremor to have hit the island since 1955, when Samos was hit by a M6.9 earthquake along its southern coast, and very similar to the 1904 M6.8 earthquake which also occurred along its northern coast. Following the event, a mini-tsunami (max tsunami runup heights of 1.5-2m and runup distances locally exceeding 20-30m) flooded the port of Samos, amplifying the building damage along the northern Samos coast.

Few hours after the event interferometric processing were triggered by the Aristotle University of Thessaloniki (AUTh) using several on-demand services (i.e. ESA SNAP DInSAR, CNES DIAPASON and CNR IREA P-SBAS) hosted on the Geohazards Exploitation Platform (GEP). This has been used to map the related co-seismic ground displacements. Processing results were immediately made accessible to the scientific community (through the GEP community area here). The processing was executed within 24 hours after the event thanks to the availability of data acquired using the Copernicus Sentinel-1 mission on the same day as the earthquake and less than 12 hours apart.

As illustrated in Figure 1 both interferometric measurements appear aligned showing a sinking pattern (up to 6-7cm) concentrated along a narrow area at the northernmost part of Samos (Agios Konstantinos – Vourliotes region), whereas the W-NW part of Samos island shows significant uplift (locally exceeding 10 cm).

According to a preliminary interpretation of what actually happened (Prof. Costas Papazachos, AUTh), “The rupture started from the hypocenter (relocated depth ~13 km), possibly expanded bilaterally in both directions (East and West), rupturing an area with a length of 55-60 kilometers and a width of 15 kilometers (the fault, white polygon). The large fault displacements possibly occurred along the western fault segment (orange area), where fault may have reached the surface, significantly shifting the sea bottom (though this can be done only by the static displacement) and generating the observed tsunami.”

This indication is suggested as an attempt to explain the significant uplift (over 10 cm) observed in W-NW of Samos island (typical for the fault footwall), corresponding to a large local fault slip (> 0.5-1 meter on the fault rupture surface), as well as the distribution of post-seismic activity which now “breaks” the fault segments that slipped less during the mainshock, mainly east, but also west of the orange area (see Figure 2).

Combining seismological data and spaceborne observations the preliminary interpretation of the earthquake activity in Samos Is. was prepared and communicated to Greek authorities (EPPO, etc.). “We count another success of Earth Observation and platform-based solutions in supporting the timely interpretation of phenomena, improving our understanding of geohazards and their consequences” says Asst. Prof. Michael Foumelis (AUTh), who supports scientific animation concerning advanced EO processing for geohazards within the CEOS activity called Geohazards Lab initiative. 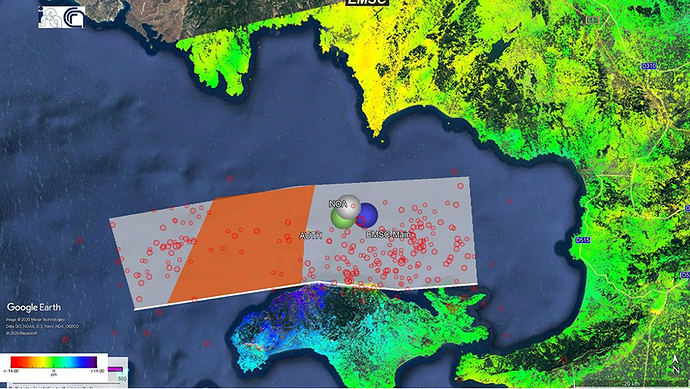 Further information on the preliminary analysis of the post-seismic sequence by AUTh (Prof. Manolis Skordilis, Dr. Eleni Teza and Dr. Petros Triantafyllidis) can be found in here.