Volcanic eruptions are usually preceded by anomalous signs that can indicate their next occurrence. The rise of magma through mantle and crust can cause different kind of interrelated processes: increase of the pressure on the host rocks, seismic events produced by fragmentation, ground deformation, strong changes in temperature, emission of magmatic gases that may change chemical composition, fumaroles or groundwater conditions, changes in the circulation pattern of subterranean fluids, changes in the density of the medium and its gravimetric signal or changes in the electric and magnetic fields at local scale.

Since 2004 Instituto Geográfico Nacional (IGN) has been in charge of volcano monitoring and alert in Spain. In order to perform its official duties a multiparametric system has been developed, mainly focused in the Canary Island as it is the most important volcanic region in Spain. Regardless of its undeniable scientific interest, Canarian volcanism implies a potential hazard for millions of inhabitants and tourists, as it has been experienced during La Palma eruption in 2021 where more than 1600 buildings were destroyed by the lava flows. This circumstance requires a constant monitoring of the volcanic activity, as well as developing preventive measures facing a possible eruptive crisis

One of the techniques applied to monitor the ground deformation is Radar Interferometry (InSAR) thanks to an automatic system which generates Sentinel-1 interferograms, coherence and displacement maps as soon as images are available. These results are combined with other deformation dataset and other geophysical information coming from the monitoring networks. This coordinated task makes possible almost real time volcanic forecasts which are essential for the management of the possible related emergency. According to its responsibilities, IGN successfully managed El Hierro and La Palma eruption in 2011 and 2021 respectively.

Slow deformation trends are important to characterise volcanic systems. The Geohazards Exploitation Platform, operated by Terradue, was used to support this activity with Earth observations data processing. In this project, called “GEP services to improve the Volcanic Monitoring System at Instituto Geográfico Nacional (Spain)” and funded by the ESA NoR programme (ID 64001) we mainly used the P-SBAS service, developed by the CNR-IREA of Italy, to calculate velocities and deformation time series making use of historical Envisat and Sentinel-1 datasets. Results over Tenerife and Lanzarote islands were presented in Fringe 2021.

Several areas in Tenerife and Lanzarote (Canary Islands) have experienced subsidence due to natural causes for more than twenty years. They were studied some time ago using InSAR and GNSS methodologies [1]. Thanks to P-SBAS results we have confirmed that subsidences continue to the present with similar rates. Regarding Lanzarote, the area which experiences deformation shows spatial changes with time which seem to be linked to interactions between aquifers and the volcanic system [2]. 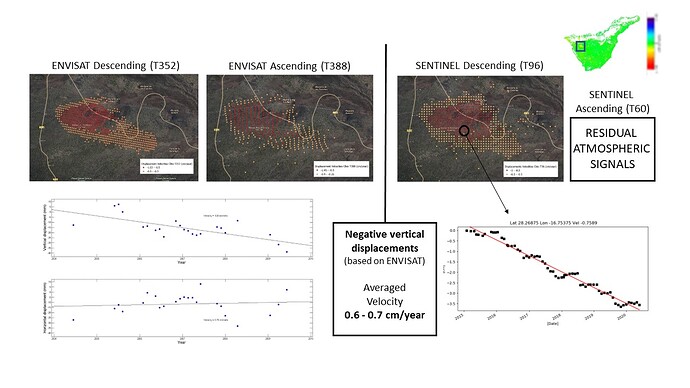 Figure 1: Velocities and time series (ENVISAT, Sentinel-1) of a subsidence area in Tenerife

Figure 2: Velocities and time series (ENVISAT, Sentinel-1) of a subsidence area in Lanzarote.

At the end of the project, in September 2021, an eruption took place in La Palma (The Canary Island) so P-SBAS was intensively used to monitor the deforming areas during almost the three months the eruption lasted. This information, combined and validated with GNSS and tiltmeter data coming from IGN networks, was extremely useful to manage the emergency. Currently, results are being studied in detail.

The project has also a dissemination aim. Since 2017, IGN has been organising training events related to Copernicus activities as it is Copernicus Relay and National Land Reference Centre. With the purpose of showing the potential of InSAR techniques to monitor deformations among public administrators, IGN organised two editions of a course where GEP supported the use of its services. A dedicated app was created to process the selected cases for the course using mainly P-SBAS, FASTVEL and DIAPASON services. These GEP sessions resulted in an excellent approach to InSAR; some participants show particular interest to include InSAR-GEP into its professional activities so a new edition is arranged for this year.

SBAS processing was carried out on the Geohazards-TEP operated by Terradue, using the P-SBAS processing service (developed by CNR-IREA) and sponsored by ESA’s Network of Resources programme (project ID 64001).