On December 12, 2021 a landslide was reported at San Isidro (Peru). Several infrastructures were affected by the event that was likely triggered by intense rainfall (for more information and pictures, see here: The 12 December 2021 landslide at San Isidro in Peru - The Landslide Blog - AGU Blogosphere).

In order to investigate the kinematic of the landslide prior to the rupture, the MPIC-OPT-SLIDE service was used to compute the displacement time series of the ground from the Sentinel-2 archive. In total, 16 cloudless images are available from 2017 and December 12, 2021. Pairs are created between 500 and 1500 days in order to detect small displacement rate (of around cm/day). 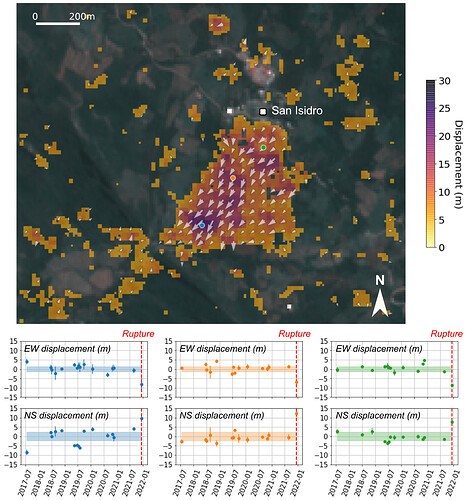 Figure_TS_disp4281×4591 1.55 MB
Figure 1: Results of the MPIC-OPT-SLIDE service over the San Isidro landslide showing the total displacement measured between July, 2017 and December, 2021. Time series of three points located in the landslide area are displayed in the bottom of the figure. Contains Copernicus Sentinel-2 data.

The results show that the ground has moved of around 20 m in the southern part of the San Isidro village (Figure 1) which is visible when the Sentinel-2 acquisitions of December 12, 2021 and August 24, 2021 are compared to each other (Figure 2). No obvious features of the landslide are visible on the December 12, 2021 Sentinel-2 acquisition, the day the landslide occurred. This is likely due to the fact that the landslide seems to be mostly translational over a relatively flat area and due to the 10 m spatial resolution of Sentinel-2.

Figure 2: Animation showing the motion of the ground surface over the landslide for Sentinel-2 acquisitions date of December 12, 2021 and August 24, 2021. Contains Copernicus Sentinel-2 data.

Inversion of the displacement time series revealed no sign of ground motion before the rupture. The slope seemed to be relatively stable over the period of 2017-2021 although image correlation techniques do not allow to measure very slow ground motion (i.e. < cm/day). Further investigation are needed to understand the kinematic of the San Isidro landslide. In particular using InSAR services such as SNAPPING or PSBAS accessible on GEP and that might be able to measure the ground motion before the landslide failure.

The results are available here