Greece is a country affected by multiple geological hazards, such as earthquakes, landslides and land subsidence related phenomena. The systematic availability of Copernicus Sentinel-1 mission data, alongside the advent of platform-based EO data processing solutions, offers the capability to monitor geohazards at a regional scale.

We present the first nationwide surface motion map from a single user, the Aristotle University of Thessaloniki (AUTh), by executing online EO service on platform resources. The SNAPPING (Surface motioN mAPPING) service is based on open-source tools for Persistent Scatterers Interferometry (PSI) analysis and designed as on-demand hosted service on the Geohazards Exploitation Platform (GEP). The first operational version of SNAPPING (v1) was made available to GEP users in February 2021. In June 2022, an upgraded version of SNAPPING (v2) was released, following a period during which architectural changes were implemented to improve the performance and the stability of the service, while onboarding users’ suggestions for improving the overall experience.

SNAPPING services generate average Line-of-Sight (LoS) motion rate maps and displacement time series at both reduced and full sensor resolutions. This makes the service suitable not only for detailed investigation of surface motion (SNAPPING PSI Full), but also when the rapid inspection of wide area at medium resolution (SNAPPING PSI Med) is of interest. Technical details on the SNAPPING implementation on GEP, including the designed processing scheme, service parameters and outputs, verification activities and demonstration over several regions can be found here.

For the nationwide processing of Greece, partly supported by the ESA Network of Resources (NoR) initiative, a dedicated scheme based on SNAPPING PSI Med was developed to ensure coverage of the entire land surface (including isolated islands). The Greek territory (~132k sq.km) was thus splitted into 54 tiles of approx. 90 x 90 km, retaining a minimum of 10 km spatial overlap between tiles. The totality of Copernicus Sentinel-1 archive over Greece in descending orbits was exploited covering the period between 04/2015 and 12/2021. The input dataset consisted of more than 18k acquisitions, corresponding to 174-198 observation dates per tile depending on the site. Nearly 4M point targets were detected at medium resolution, providing insights on the average surface motion rates and corresponding displacement histories.

Following the generation of the PSI measurements, several improvements are foreseen to compensate for the effect of seismic events on the long-term velocity estimates and the harmonization of independent tiles into common reference frame. The seamless visualization and public dissemination of the initial measurements through the GEP platform is foreseen in Q1 2023. 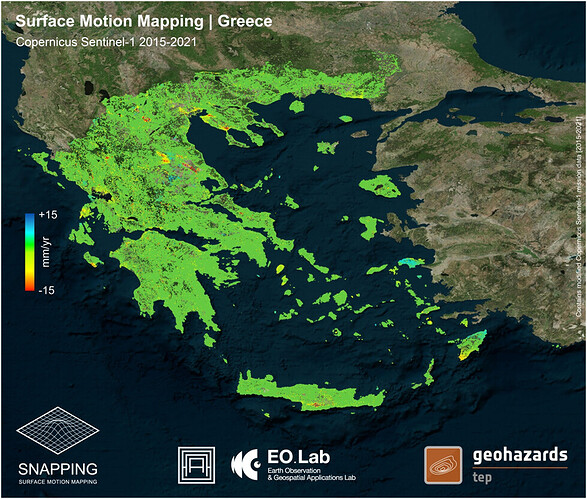