Sergiopolis is a cultural heritage site located in the Ar-Raqqah Governorate in Syria. It is well-known to the archaeologists because it is one of the best preserved fortified settlements of the eastern border of the Ancient Roman Empire and the pilgrimage site dedicated to the Roman officer Sergius who was martyred there. The solid fortifications that in the past provided shelter against the Parthians, dominate the Syrian desert steppe at the eastern bank of the Wadi es Sélé, and impressive archaeological ruins still stand.

Satellite imagery is extremely helpful to monitor the condition of such remote locations, where in situ inspection might be hampered not only by difficult logistics, but also by security concerns for the operators.

Sergiopolis has been unfortunately affected by extensive looting (i.e. not authorised excavations) that took place prior to the Syrian civil war. The typical circular features of looting pits are well visible from above using both optical and radar very high resolution satellite images. But apparently this is not the only type of hazards that may affect the site.

At the end of October 2018, a flooding event happened around Sergiopolis, but no information was available either in the published scientific literature or in the media, until we started to browse the archive of Sentinel-2 multispectral images from the Copernicus Open Access Hub. As discussed in detail in our paper recently published in Scientific Reports by Springer Nature, the cloudless Sentinel-2 image collected on 30 October 2018 shows a clear flood pattern compared to the situation on 15 October. The flooded area is best observed if the Normalized Difference Flood Index (NDFI) is computed.

However, Sentinel-2 does not provide other cloudless images until 14 December 2018, when the flooding event was already over. Therefore, it is difficult to constrain temporally the event, unless we use the full time series of Sentinel-1 images from both ascending and descending geometries acquired from 16 October to 9 November 2018. Sentinel-1 data have been processed using the SNAC-SNAP S-1 GRD Amplitude Change processing tool on the GEP, and change detection maps were generated ( Figure 1a, d-f ). Furthermore, the ascending mode SAR image pair (16 vs. 28 October 2018) was also processed with GEP’s COIN—Coherence and Intensity change for Sentinel-1 service, and the interferometric coherence map was created ( Figure 1b-c ).

The change detection analysis based on Sentinel-1 allowed us to pre-date the start of the flooding on 28 October, i.e. at least 2 days before the evidence showed by the Sentinel-2 image. The extent of the flooded landscape south and in the nearby of Sergiopolis is well delineated by the red pattern in the RGB colour composite ( Figure 1b ) and the matching blue-coloured pattern in the coherence map ( Figure 1c ). At larger scale, swollen rivers and flooded land appear as brighter areas of increased radar backscatter in the VV polarized image better than in the VH one. This would suggest that waters were generally not deep and the terrain soon became wet and muddy. On 3 and 4 November the upper part of the hydraulic basin where Sergiopolis is located was still flooded. The RGB composite and the ratio map (3 November vs. 28 October, ascending mode, VV polarization; Figure 1d-e ) do not reveal evident change, except for some patterns of increased radar backscatter localised south of the fortification walls, in front of their NW corner (white arrows in Figure 1e ). 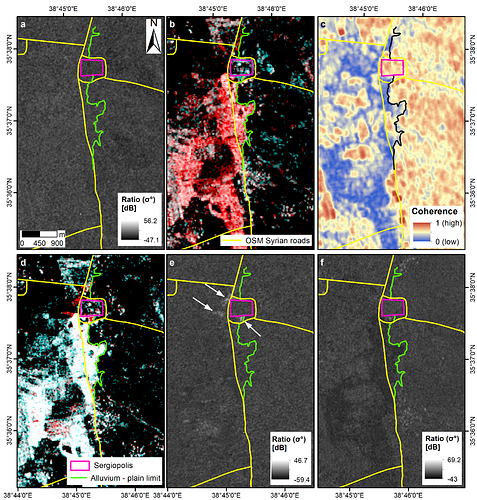 In addition to clarifying the time frame of the event, the flood patterns extracted from the Sentinel-1 data allowed us to understand the current exposure of Sergiopolis to flooding. According to the archaeological records, scholars have recently hypothesised that the site was formerly supplied with drinking water through a floodwater-harvesting system, and they also performed hydraulic modelling to test this hypothesis. Compared with such hydraulic modelling, our results demonstrates that flooding is a likely natural hazard in Sergiopolis, if the floodwater-harvesting system is not functioning anymore, and no maintenance or management measures are undertaken at the site.

Our research proves once again the value of analysing Sentinel-1 images on the GEP using standardised processing routines, to make the best out of the information stored in the huge archives of Sentinel-1 data, that just wait to be analysed. In the case of cultural heritage, such activity of satellite data processing and analysis is important because the scientific outcomes that are achieved can help to improve our knowledge of ancient sites and monuments, and assess the impact of natural hazards on their future conservation.