Sentinel-1 imagery helps mapping Jade mine landslide of July 2, 2020 during the monsoon season in Myanmar

A landslide occurred on July 2, 2020 in the jade mining region in Myanmar killing 170+ workers and wounding 50+ of them. This region is intensively covered by mines and particularly known for deadly landslides caused by this activity. From 2015 to 2018, D. Petley reported up to 800 fatalities in the region of Hpakant area.

The landslide occurred in a mine in the South of Hpakant near the Hwehka village. A video of the catastrophe shows the collapse of one wall of the mine triggering a tsunami in the water present at the bottom of the mine. Waves of several meters are seen to be moving back and forth.

The weather conditions in Myanmar have been difficult because of the monsoon in Southwest Asia. The cloud cover of the previous weeks and months has prevented the use of optical data. The most recent cloudless Sentinel-2 acquisition over the are was taken on May 10, 2020. No cloudless optical image has been acquired in the period following July 2 making it difficult to locate and map the extent of the landslide.

Radar acquisition can “see” through the clouds, a precious advantage used for flood mapping. Landslide mapping with radar amplitude data is however not always an easy task especially in mines. This is because mining collapse does not remove a pre-existent vegetation and is likely to occur in an environment where the coherence is generally very low due to rapid removal of the ground surface. 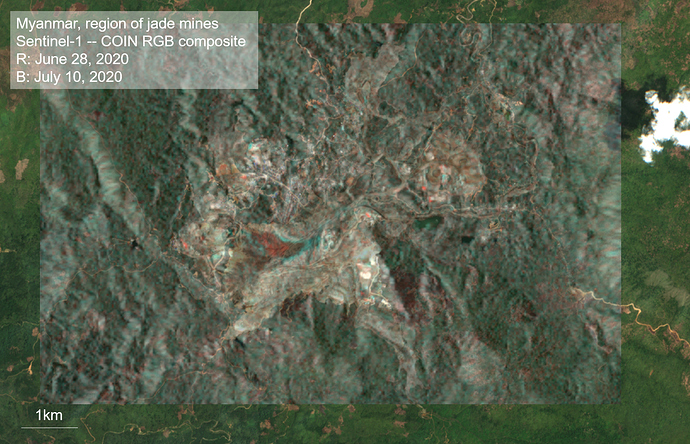 coin1745×1125 740 KB
COIN RGB composite displayed over the mine corresponding to the location given by the International Charter of Space and Major Disaster. Significant amplitude changes appear in red in the image and are interpreted as the location of the landslide. The May 10, 2020 Sentinel-2 acquisition is displayed on the background. Contains modified Copernicus Sentinel-1 and -2 (2020).

The first post-collapse radar acquisition was made on July 10, 2020 by Sentinel-1 over the region of interest. The COIN service on the GEP has been used to analyse the region and locate the event with the Sentinel-1 acquisitions of June 28 and July 10, 2020. A clear red spot appeared on the RGB composite near the location given by the International Charter Space and Major Disasters. The RBG composite of COIN is constructed with the amplitude of the pre- and post-event acquisition. The red areas are due to an increase of the radar amplitude that here correspond to the extent of the landslide deposit while the blue areas are due to a decrease of the radar amplitude that here correspond to areas newly covered by water. The motion of the ground downslope is clearly visible in the animated image of the two successive acquisitions.

Despite the relatively small extent of the mine collapse and of the deposit zone (ca. 400x400m) in a non-optimal context for radar detection, this example shows the value of radar acquisitions for mapping landslides during the monsoon season in Asia.

Link to the public data package can be find on GEP here.