Freetown is the capital city of Sierra Leone and the largest city of the country with a population of 1,055,964 at the 2015 census. The main economic activity of the city is related to harbour located in the estuary of the Sierra Leone River.

The city population has raised significantly in the last 40 years and was of only 276,247 back in the 70’s. As a consequence, slums have developed in several part of the city and mainly in the coastal areas at river mouths. In these areas, the houses are built on top of a layer of rubbish of 1 to 2 meters deep which lies above sand. As a consequence, the houses are often very unstable and prone to be destroyed in case of flooding. Moreover, the city is surrounded by mountainous areas that in case of heavy rains are prone to collapse and spread over long distances. An example is the catastrophic mudslide of August 14, 2017 who caused thousands of fatalities and severe damages.

The stability of the ground in the Freetown urban area is hence a major concern to estimate the areas at risk and its magnitude. Earth observation can provide useful information to identify unstable areas thanks to Radar interferometry. Indeed, this technique monitors the ground motion with a millimetric accuracy and high density of measurement points. In the case of Freetown, the P-SBAS service developed by CNR-IREA processed on GEP 78 scenes of the Sentinel-1 satellite between April 2017 and August 2019.

Freetown_121803×889 118 KB
Figure 1 – Mean LOS velocity over the city of Freetown, Sierra Leone with a zoom on the unstable areas located in the southern part of the city. The velocity was computed on GEP with PSBAS service. Contains modified Copernicus Sentinel-1 and 2 data (2017, 2018, 2019).

The results show that most of the city appears stable (Figure 1). In particular, no sign of instability is observed at the location of the 2017 mudslide. This is probably due to the poor coherence of the signal in the mountainous areas preventing to retrieve measurement points. However, four areas are undergoing subsidence (the ground moves downward). All these areas are located at river mouths of (1) the Congo Valley river, (2) the Alligator river, (3) the Nicol Brook/Bambara spring and (4) the Granville Brook. The time series of the LOS velocity shows a subsidence of up to 5cm in zone (1), 6.5cm in zone (1), 4cm in zone (1) and 12cm in zone (4) (see Figure 2).

The zones detected as instable are known slum areas where the population is already exposed to multiple risks (sanitary, environmental, etc.). In a context of sea level-rise, the subsidence of these districts represent on additional risk for the population living there. 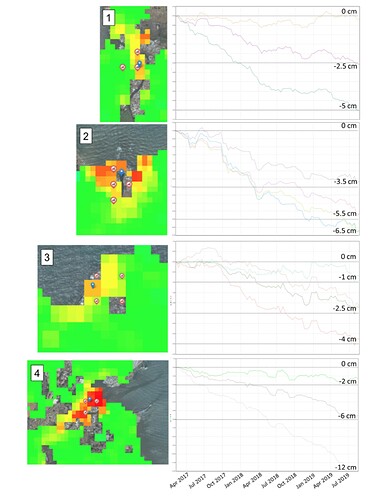 Freetown_21920×2523 184 KB
Figure 2 – On the right graphs are displayed the time series of the LOS displacement for the four identified unstable areas. On the left images are plotted the location of the corresponding points (red symbols) for which the time series are displayed. These results are computed with P-SBAS on GEP. Contains modified Copernicus Sentinel-1 and 2 data (2017, 2018, 2019).

The results are publicly available here.