This research was conducted using freely available software, tools and also services sponsored by the NoR (Network of Resource) program of the European Space Agency (ESA), ID:66232 using the Geohazard TEP platform and the SNAC tool, Diapason service developed by the TRA ALTAMIRA and CNES, and SBAS (G-POD) service developed by IREA-CNR. The research comprised of two parts. First part included research of new methodology on synergic use of S-1 and S-2 data for detection of landscape changes triggered by an earthquake. The second part focused on a comparison of selected free services (at the time of the research) to easily evaluate an earthquake.

Abstract of the paper:
Earthquakes can trigger numerous landslides and cause other significant changes in the landscape over large areas. This study presents a new processing scheme combining radar (Copernicus Sentinel-1) and optical satellite data (Copernicus Sentinel-2) to quickly and easily map landscape changes such as landslides, coastal uplift and changes in water bodies caused by a severe event such as an earthquake. The processing scheme has been tested for the 2016 Kaikoura earthquake (Mw 7.8), New Zealand, which impacted vast and mostly inaccessible areas, causing hundreds of landslides. The workflow combines the following change-detection methods: i) Sentinel-1 amplitude change detection ii) Sentinel-2-based detection of non-vegetated areas that occurred after the event using the atmospherically resistant vegetation index (ARVI). To get a more complex view of the surface changes caused by the Kaikoura earthquake, the available online services and tools were further tested (open source via the European Space Agency) allowing automatic detection of vertical displacements and deformations. It was concluded, that the above-mentioned approaches facilitated the assessment of earthquake-triggered changes in a comprehensive manner. The methodology is an example of how to detect earthquake landscape changes in an automatic and rapid manner. The new processing scheme for the synergic use of Sentinel-1 and Sentinel-2 data has high potential to be used for operational and scientific purposes, since it relies on globally available, free data and provides high spatial and temporal resolution. The results can be obtained and made available only a few days after an event, therefore providing significant insights into earthquake impact assessment and may also be helpful for prioritizing field work.

As a case study, the reaserch used the major 2016 Kaikoura earthquake (Mw 7.8) in New Zealand. The tested area was also limited by the used Sentinel-2 scene footprint. The total impacted area was enormous (over 3500 sq. km) and there were tens of thousands triggered landslides.

In the first part of the research we were able to detect all major changes, which occured as direct result of the earthquake, including landslides, uplifted seabed, dammed lakes and changes in river flows. The improved workflow included optical data change detection using ARVI spectral index together with SNAC-based amplitude change. Results were validated using open in-situ databases. 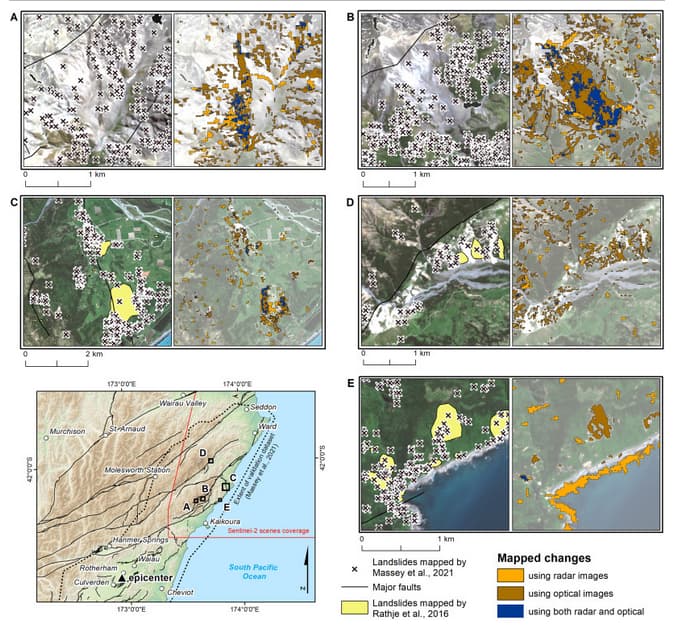 The second part included demonstration of free Sentinel toolboxes in SNAP software, such as DInSAR workflow and offset tracking based on free Sentinel-1 data and public services based on GEP/G-POD, enabling interferogram generation and displacement estimation. The paper provides results examples and summarizes pros and cons of these tools/services. All the evaluated tools and services offer unparalleled chance for anybody to conduct a research without having much funds which means a crucial improvement in the science availability.