This project is sponsored by the NoR (Network of Resource) program of the European Space Agency (ESA), the Project (ID:65514) using the Geohazard TEP platform and the P-SBAS algorithm developed by the CNR-Irea of Italy. It is a scientific collaboration between the Sapienza University of Rome and the Center Millennium Cycle in Subduction Zones (CYCLO) promoted by the Chilean government.

Abstract:
Coastal areas concentrate a large portion of the country’s population around urban areas, which in subduction zones commonly are affected by drastic tectonic processes, such as the damage earthquakes have registered in recent decades. The seismic cycle of large earthquakes primarily controls changes in the coastal surface level in these zones. Therefore, quantifying temporal and spatial variations in land level after recent earthquakes is essential to understand shoreline variations better, and to assess their impacts on coastal urban areas. Here, we measure the coastal subsidence in central Chile using a multi-temporal differential interferometric synthetic aperture radar (MT-InSAR). This geographic zone corresponds to the northern limit of the 2010 Maule earthquake (Mw 8.8) rupture, an area affected by an aftershock of magnitude Mw 6.8 in 2019. The study is based on the exploitation of big data from SAR images of Sentinel-1 for comparison with data from continuous GNSS stations. We analyzed a coastline of ~300 km by SAR interferometry that provided high-resolution ground motion rates from between 2018 and 2021. Our results showed a wide range of subsidence rates at different scales, of analyses on a regional scale, and identified the area of subsidence on an urban scale. We identified an anomalous zone of subsidence of ~50 km, with a displacement <−20 mm/year. We discuss these results in the context of the impact of recent earthquakes and analyze the consequences of coastal subsidence. Our results allow us to identify stability in urban areas and quantify the vertical movement of the coast along the entire seismic cycle, in addition to the vertical movement of coast lands. Our results have implications for the planning of coastal infrastructure along subduction coasts in Chile.

The study area extending between 33.75° S and 34.75° S is located on the area’s northern boundary affected by the 2010 earthquake. This zone is characterized by the existence of active crustal faults. This is demonstrated by the pair of earthquakes (magnitude Mw 6.9 and 7.0) that occurred one week after the 2010 mainshock. During the observation period analyzed in this paper, an earthquake of magnitude Mw 6.8 occurred in August 2019. This event is a reverse earthquake, a typical quake occurring at the interface between tectonic plates (Figure 1). 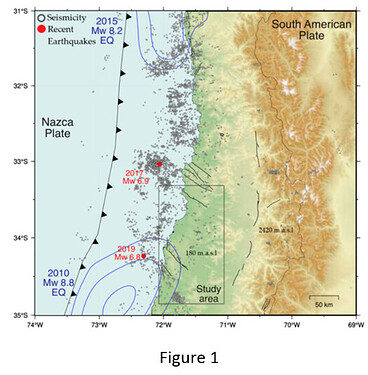 The results, show the regional deformation phenomenon detected by the DInSAR analysis in the coast of central Chile, and its correlation with GPS data (Figure 2), with a length of 300 km effectively covered by SAR data. To represent a regional displacement overview, we use a big data based on PSI (Persistent Scatterers Interferometry), obtained from interferograms, using the total coverage of the Sentinel 1 images, that is, 250 km of coverage in S-1 IW mode, this has allowed us to cover very large areas, over the central region of Chile.

The coastal subsidence area covers ~ 2000 km2, the area includes urban districts such as Pichilemu and small rural towns such as: Navidad, Litueche, La Estrella, Marchigue and Paredones. The coastline represents a length of 50 km, it is affected mainly by the effects of the tectonic subsidence (Figure 3). 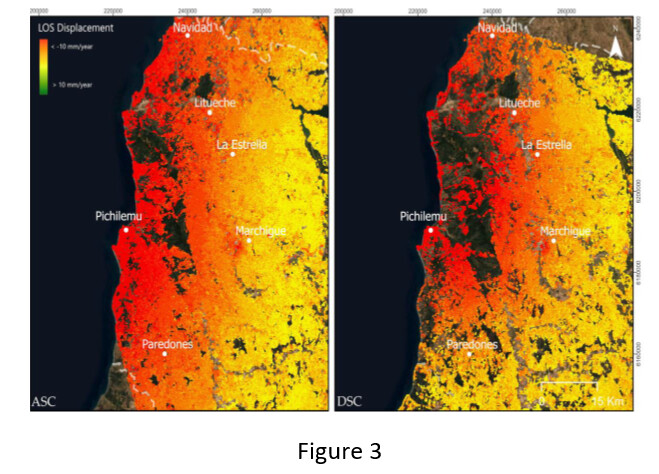 The vertical and horizontal components were calculated for the area of subsidence, where the subduction at the margin of the central Chilean coastline can be clearly seen (Figure 4). 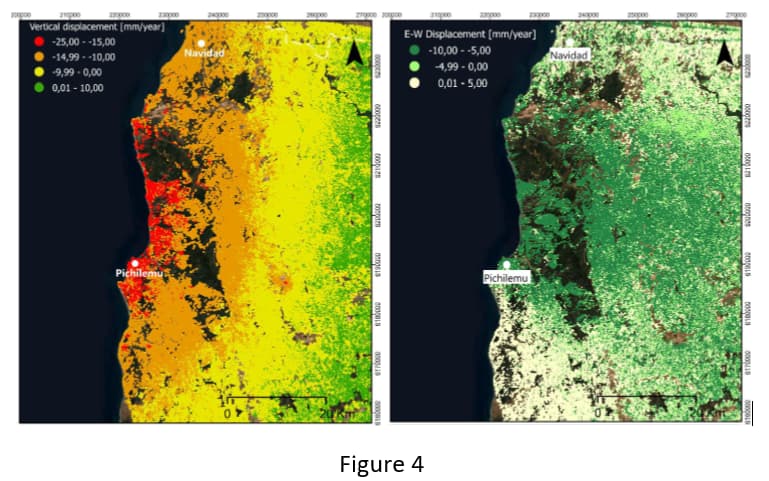 Conclusion
The results of both orbits of the satellite sensor were shown in a similar way from the point of view of spatial density; however, there is a foreshortening effect for some areas that can be improved by complementing the orbits. The available GNSS data have shown correlations with SAR data, considering that both complementary technologies are reliable, low-cost resources. We have shown that the deformation of the coastal surface is imposed by the seismic activity of the subduction area on a large scale, and that there are different factors that can enhance the subsidence of urban areas, such as geological faults and soil typology. From the analysis of the data and the cartography, it is concluded that there are tectonic conditions that configure current scenarios and potential threats inherent to a tectonically active seismic coastal zone. We also conclude that in the medium term there may be an increase in risk resulting from greater exposure generated by the protrusion of the urban fabric on dune fields near the coast, susceptible to tsunami flooding or increases in sea level. To verify the risks associated with the effects of earthquakes and coastal tectonic subsidence in urban centers, it is necessary to complement our information with that obtained from local surveys; however, the results obtained allow us to understand the phenomenon of tectonic subsidence of the Chilean coast in urban areas, detect potentially hazardous areas, and contribute to correct spatial planning.