With the aim to test the capability of the Geohazards TEP and its P-SBAS advanced InSAR processing service for ground deformation monitoring using SAR big data, we selected a coastal study area in southern Italy that has been affected by geohazards for centuries.

The area encompasses the city of Crotone and its wider province in Calabria region. Here, several marine terraces overlying the Cutro Clay provide the evidence of the strong uplift that affected the Calabrian Arc since the Middle Pleistocene. Coastal erosion has been affecting the 3 km EW-elongated Capo Colonna promontory for centuries, together with subsidence and tectonic-induced submergence of structures that were once sub-aerially exposed along the coast. In addition to natural processes, other factors cause surface deformation, such as hotspots of groundwater pumping for local agricultural and industrial activities, and hydrocarbon exploitation. These natural and anthropogenic activities pose risk to urban structures built onto the terraces, including its archaeological site and Hera Lacinia’s sanctuary.

Using P-SBAS, we processed two very long Sentinel-1 stacks, each composed of ~300 images acquired in 2014–2020, one in ascending and the other in descending mode. We retrieved thousands of coherent targets across the whole processed area (Fig.1), with associated time series covering the 6 year-long monitoring period. 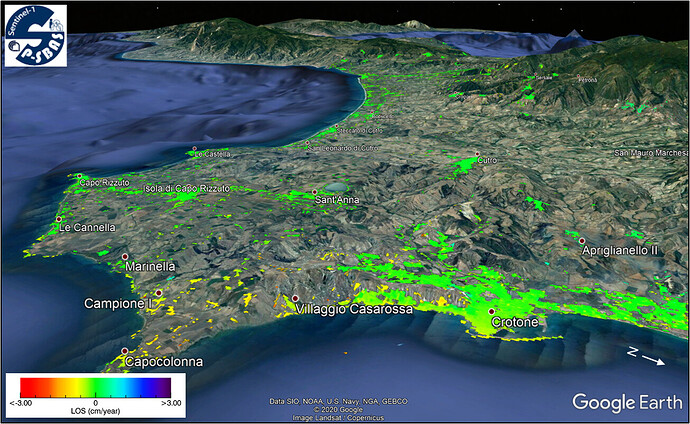 
The two datasets of InSAR results from the ascending and descending mode analysis were combined to retrieve vertical and east-west displacement velocities (Fig.2a-b), based on which three main zones affected by ground deformation were identified: 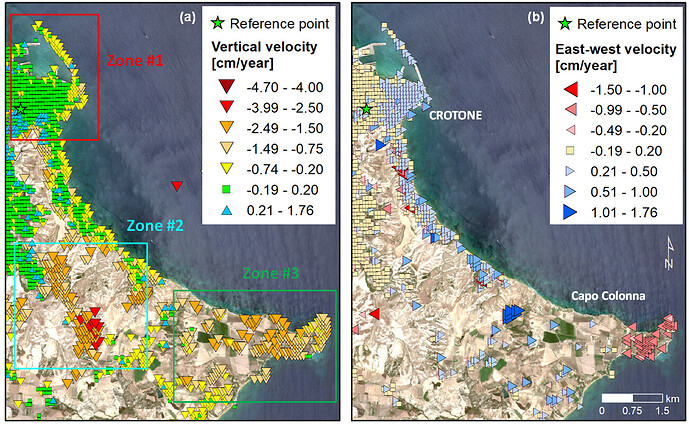 Fig2_PSBASvertical&amp;EWvelocities1299×799 502 KB
Figure 2 : (a) Vertical and (b) east-west displacement velocity in 2014–2020, retrieved via combination of ascending and descending mode Sentinel-1 P-SBAS InSAR datasets, with indication of the 3 identified zones of ground deformation. Results are overlapped onto Sentinel-2 imagery. Source: [full paper]


Therefore, these deformation areas allowed us to explore the following use-cases of:

with respect to which prototypes of InSAR-based value-added products could be tested.

In Zone #2 (Fig.3), the integration of the P-SBAS results with information on existing mass movement processes from the hydrogeological setting plan enabled the updating of the state of activity and intensity of several mapped processes.

For instance, at the elongated polygon outlining a dormant landslide area with a medium hazard level (polygon A in Fig.3a), P-SBAS results reveal occurrence of displacement velocity suggesting an active status in 2014–2020, with up to −1.4 cm/year vertical rates, and up to 30–50 cm/year observed along the steepest slope direction.

Similarly, at a superficial landslide zone comprising calanchi landforms (polygon B in Fig.3a), P-SBAS results show up to −3.0 cm/year vertical rates, and nearly 10-50 cm/year along the steepest slope direction – though, in this case, this may not be the predominant deformation direction for the whole landslide body, given the existence of some accumulation zones, as well as some scarps. 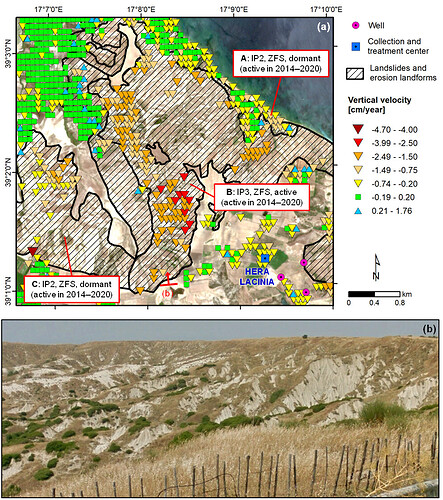 The detailed account of the temporal behaviour in the last 6 years provided by Sentinel-1 (Fig.4b) reveals some previously unknown short-term trend variations that overlapped onto the main subsidence process, and an acceleration with respect to its long-term trend as depicted by ERS-1/2, ENVISAT, TerraSAR-X and COSMO-SkyMed data. This is essential knowledge that often cannot be depicted via short-term assessments based only on a few months or 1-2 years of observations. 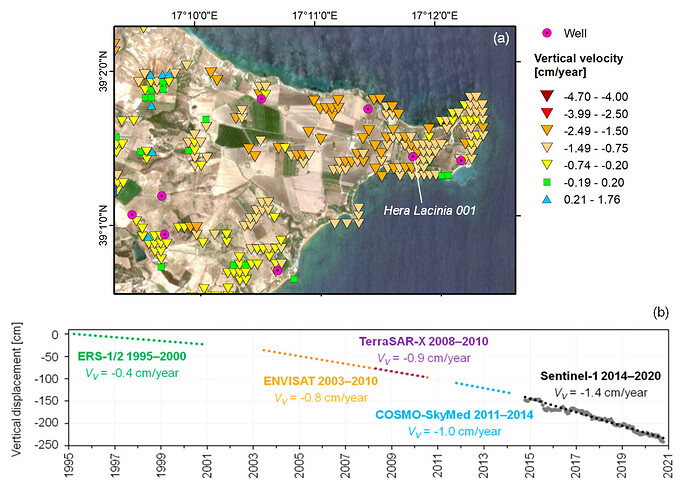 Fig4_Zone3_CapoColonna1218×870 267 KB
Figure 4 : Zone #3: (a) Vertical displacement velocity at Capo Colonna in 2014–2020, overlapped onto Sentinel-2 imagery; and (b) 1995–2020 vertical displacement time series of a target within the main subsidence bowl, obtained by stitching the Sentinel-1 displacement results with the ERS-1/2, ENVISAT, TerraSAR-X, and COSMO-SkyMed trend lines from previous studies . Source: [full paper]

These outcomes prove the benefits that long time series of Sentinel-1 big data can bring to refine geohazard characterization, even by advancing the understanding of a phenomenon studied for years such as land subsidence at Capo Colonna.

The integration with other geospatial datasets – either from in situ measurements or national repositories – allows for an effective valorization of the information extracted from SAR deformation time series, to achieve a correct interpretation of (geo-)hazard processes and a value-added understanding of their impacts on local environment, population and infrastructure.

This work has been recently presented at the EGU General Assembly 2022, during the thematic session “ GM6.5 - Coastal subsidence: natural and anthropogenic drivers ”.

Further dissemination has been made during the ESA Living Planet Symposium (LPS22), during session “ B4.01.1 Heritage Missions and Long Time Data Series – 1 ”.


Acknowledgement : Sentinel-1 data were processed using the P-SBAS on-demand service, developed and integrated by CNR-IREA in the Geohazards TEP. This work was carried out in the framework of the GEP Early Adopters Programme and the Geohazards Lab initiative, the latter developed under the CEOS Working Group on Disasters.