Satellite InSAR techniques are now well-established and increasingly used by the geoscience community for scientific applications, as well as by practitioners and professionals (topographers/surveyors, geographers, engineers) to complement traditional geodetic surveying.

For a correct use of InSAR datasets, their quality must be assessed through rigorous analysis of their precision (displacement velocity standard error) and accuracy (systematic errors of InSAR estimates against the true/reference values). These metrics can inform about the capability of InSAR to provide reliable estimates on the deformation process under investigation.

To contribute to this research topic, we used both Persistent Scatterers InSAR (PSI) and Small-Baseline Subset (SBAS) consolidated algorithms to process 2 years of Sentinel-1 SAR data acquired over the Aguascalientes Valley in Central Mexico, an 80 km-long tectonic graben delimited by a system of N-S oriented normal faults, which has long been affected by land subsidence as a consequence of the overexploitation of groundwater resources from the Ojocaliente-Aguascalientes-Encarnación aquifer.

In particular, the SBAS processing was run using the Parallel-SBAS (P-SBAS) workflow in GEP.

Ascending and descending mode results were combined to extract vertical and horizontal displacement velocity datasets (Fig.1a-b), that revealed a structurally-controlled land subsidence process exhibiting fast vertical rates (up to −150 mm/year) and a non-negligible east-west component (up to ±30 mm/year). 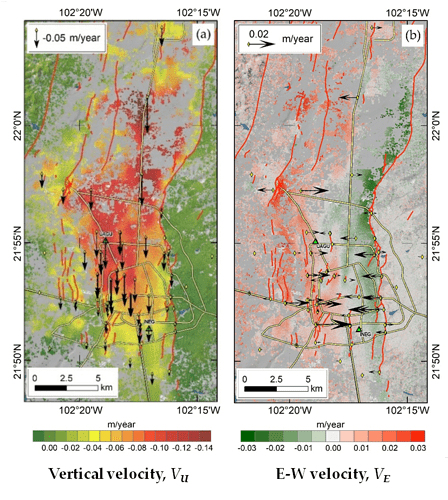 The PSI-SBAS inter-comparison (Fig.2a-b) revealed standard deviation of 6 mm/year and 4 mm/year for the vertical and east-west rate differences, respectively, thus reassuring about the similarity between the two types of InSAR outputs.

Accuracy of the PSI and SBAS datasets was then assessed against a wealth of contextual geodetic data: permanent GNSS records at 2 stations, static GNSS repositioning at 82 benchmarks, and geodetic leveling monitoring data at more than 200 benchmarks that the National Institute of Statistics, Geography, and Informatics (INEGI) of Mexico collected in 2014−2016 and made available for the purposes of this international research collaboration. 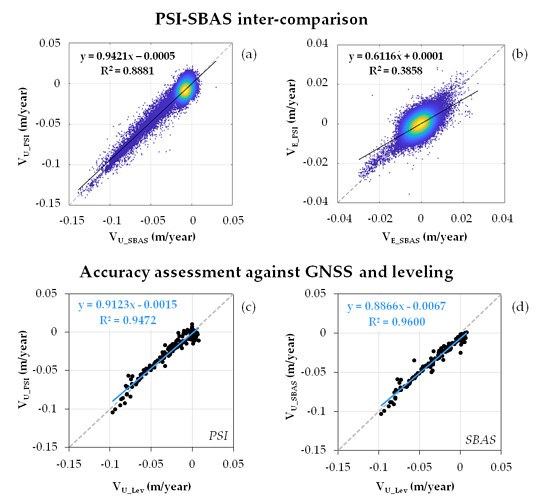 Only limited proportions of these differences are due to the assumption of null north-south velocities (±3 mm/year vertical and ±0.1 mm/year east-west differences when north-south rates reach ±18 mm/year), whilst the majority can be explained by the proximity of the GNSS and leveling benchmarks to the main fault traces, whereby they may be associated with SBAS ground pixels or PSI targets located just to the other side of the faults, hence exhibiting different deformation behavior. In the future, by establishing new benchmarks at higher distances from the fault traces or by exploiting higher resolution SAR scenes and/or InSAR datasets, we may be able to improve the detection of the benchmarks and thus consolidate the statistics of the InSAR accuracy assessments.

The statistics achieved in the current data setting not only confirm the accuracy of the SBAS and PSI outputs generated by means of consolidated processing techniques and algorithms, but also highlight the benefit of relying on ground monitoring network data that are collected according to standard and reproducible procedures and protocols by a public body in charge of geodetic surveying, such as INEGI in Mexico.

On the other hand, as these statistics are based on a 2 year-long temporal interval of observation only (constrained by the available geodetic data), they should be considered as a “lower bound” of accuracy that can only be improved. This means that, should longer Sentinel-1 data stacks be processed with such InSAR methods, the derived displacement rate estimates will likely improve in quality (also thanks to atmospheric effects that will be removed more effectively).

This work has been recently presented at the ESA Living Planet Symposium (LPS22) as part of the presentations delivered during the session “A7.05.1 InSAR for the groundwater management” and “B4.01.1 Heritage Missions and Long Time Data Series – 1”.

Acknowledgement : These results were achieved thanks to a research collaboration between remote sensing scientists and geodetic surveyors at CNR-ISAC, INEGI and ASI.
PSI processing was carried out at INEGI with the StaMPS software, while SBAS processing was carried out in the Geohazards TEP using the P-SBAS method (developed by CNR-IREA) and sponsored by ESA’s Network of Resources initiative (project id.190791).